The goal is to win league championships, unless it is not. 2021 for FC Edmonton was not about being a Cinderella story that went from last place in 2020 to first place this season. With a new Head Coach in Alan Koch and double digit new faces on the roster this season was about tempered expectations and improvement.

A 1-0 win on Sunday afternoon at Clarke Stadium versus Forge FC (the 2-time League Champions) moved Edmonton past Ottawa in the league standings to finish 7th overall. Their final record shows 6 wins, 10 draws and 12 losses. The .571 percentage of games they earned points in sits as the new high in their 3-year tenure in the Canadian Premier League (CPL).

This is not a game review. This is the opportunity to express gratitude to a team that could have simply waved to the fans and walked off the pitch on what was a windy afternoon. After an entire season plus eight games of playing in a neutral site and multiple re-scheduled home games this year, what the Eddies players did post game was pure class.

It was great to see the #FCEd players come over and salute the fans. Thanks for a great day with my son. We’re all set for next season! pic.twitter.com/4H6BqVNxOh

Post game tradition at Clarke Stadium is the River Valley Vanguard (RVV), the Supporters Group, and many fans line up along the fence to clap the players off the field. In a show of mutual respect the players clap back but today they took it a step further. The players huddled in front of Supporters Section (section 107) and with defender Paris Gee leading the charge began chanting towards the fans. A fantastic moment! 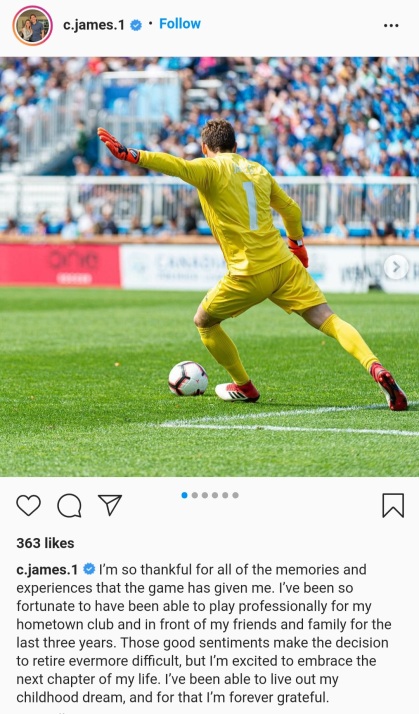 Mere hours after the game Connor James announced his retirement via Instagram. For the Eddies tenure in the CPL, James has been their number one starting goalkeeper. He was the goaltender of record for the Club’s first ever victory in this league back on May 4, 2019 against Valour FC finishing that season as a nominee for goalkeeper of the year. Finishing this season with 24 appearances and in the top three for saves made, James will be missed by the fans and Club alike.

198 days until the Edmonton Prospects Baseball Club begin their 2022 regular season. It will be the Club’s 16th active season in the Western Canadian Baseball League (WCBL). Four days later, Tuesday May 31st, the Prospects are scheduled to play their first home in Sherwood Park.

“Initially we had hoped to open (Metro Ballpark in Spruce Grove) next summer for the 2022 Season but we have now had to re-assess our schedules and through that process, have come to the realization that opening in 2022 is just not possible.  Losing 2½ months this past summer due to matters relating to the Migratory Bird Act combined with supply chain shortages due to COVID-19 make it virtually impossible to complete a project of this size and scope in the next seven months,” said Patrick Cassidy, Managing Partner for Gold Sports and Entertainment Group Corp., the company that operates the baseball team and will manage the facility.

“While discouraging in one respect, it is also exciting to know that we now have an Opening Date.  The date we will be putting forward with the league is May 27th, 2023.”

The team dubbed themselves “the travelling road show” last season compiling a 12-9 “home record”. The Prospects will once again call Centennial Park Field 9 in Sherwood Park home playing 19 of their 27 home games there. Along with hosting the home opener, Sherwood Park will also host the Father’s Day game.

June 3rd through 5th, the Prospects will play a 4-game series in Lethbridge, the team that bested them for the WCBL Championship last season,  as a part of the Lethbridge Baseball Festival.

On July 21st, the Prospects will participate in the 2nd Annual Baseball Day in Canada! One stadium, 4 teams..the Club will face the returning Regina Red Sox with the event taking place at Gulls Stadium in Sylvan Lake.

The Saskatchewan teams are back! Welcome back to the Moose Jaw Miller Express, Weyburn Beavers, Swift Current 57’s and Regina Red Sox. Also coming back from a pandemic induced hiatus are the Medicine Hat Mavericks (who have moved to the East division with the Saskatchewan teams), Brooks Bombers and Fort McMurray Giants.

Alright, I’m back from a camping trip and ready to write more about the Stingers!

The Edmonton Stingers finished their Ontario portion of the 7 game road trip with a win at Guelph. They currently sit at the top of the Canadian Elite Basketball League (CEBL) standings at 8-1.

(Xavier Moon’s 4th and 5th fouls in that Ottawa loss were…bogus. Berhanemeskel elbows Moon in the neck, and Moon gets the foul? Ward and Moon have some very slight incidental contact in the key, away from the ball, which is 100% of the time a no-call, but in this case it’s enough to blow the whistle and boot Moon out of the game? I’ll digress a little. We had a lot of opportunities to win that game, but we let it slip away.)

So far in this 2021 campaign the Stingers have been the most impressive team on the floor. I’ll break down their 7-man rotation and how well they compliment each other below. (With some GIFs from their last win over Saskatchewan and the win in Hamilton.) Let’s begin with the starting 5.

I’ve already written a couple articles on Moon (his Finals MVP Performance here and his 38 point CEBL Record here). This guy is not only the face of the franchise but also the face of the league right now. He can score from all 3 levels almost at will sometimes. His scoring has also opened up his playmaking abilities as well, he’s currently leading the league in assists per game too.

In this clip, Moon takes the ball right into the key as the defense is just setting up. Baker’s man leaves him to help defend and that’s a wide open 3 for the Baker Man and an easy assist for Moon.

Kamba is such a strong player, he’d be a starting small forward on any team in the league. (He was our starting SF in the Summer Series last season. I reviewed his Semi-Final performance vs Ottawa here.) He’s been a monster on the offensive boards where he loves to hunt for a monster finish. His bread and butter has been catch and shoot 3’s, boosting his teammates assist totals. Most importantly though is his defense. Every game he’s tasked with defending the other team’s best player and every time he holds them below their PPG average.

On this play, the Hamilton defense overplays on Baker as he backs his man down into the key. Skeens’ man helps on Baker, and Kamba’s man helps on Skeens. Leaving Kamba for a wide open 3 and an easy assist for Baker.

This squad essentially starts 2 power forwards. Baker has been an everything guy for this team. He makes timely shots, including his improved efficiency from 3, he makes plenty of great passes, he finishes at the rim or from midrange and of course he’s a rebounding fanatic. An undermentioned part of his game is his defense. One of the reasons this group can comfortably put Kamba on nearly any player is that all these guys defend so well. Baker is one of those guys that makes it difficult for anyone with the ball.

This is a neat little play here. Baker sets a screen for Moon at the top. Both defenders converge on Moon so he gets the ball to Baker. Johnson’s man has to help and get in between Baker and the rim. All Baker has to do is throw the ball up and Marlon Johnson violently puts in 2 points.

Looking at some of his international stats heading into this season, we’ve pretty much been getting what we expected out of this guy. He finishes at a high percentage at the rim, grabs loads of rebounds (challenging Baker for most on the team) and is a solid help defender too, getting a block or two a game. He doesn’t always score a ton but he doesn’t need to to make an impact on the game.

This clip is a perfect example of Skeens’ hustle. He fights and jumps for the offensive board between 2 defenders. However, he doesn’t come down with it himself. He has the awareness to see Kamba wide open behind the 3 point line and swats the ball over to him. That’s a hustle play that got the Stingers 3 points.

If you watched the 2019 season then you’ll remember this guy in a Rattler uniform causing us all kinds of problems. I’m glad he’s been a Stinger this season, for many reasons! He has length and is another very strong defender, hits midrange shots almost automatically and makes plenty of 3’s too to keep defenses honest. Finally, Marlon is a highlight dunk machine. It’s just fantastic every time he skies for a violent finish.

This next clip is a head’s up play. Marlon Johnson has been lethal from midrange. Hamilton is playing a zone here. They somehow allow Johnson take one dribble to the elbow with no resistance. Defenders converge as he elevates for a jump shot, leaving Skeens alone under the hoop. Johnson passes it instead, earning himself a nice assist on a power dunk.

For the 3rd season in a row Adika has been our 6th man. He has been on a tear this season, as soon as he drops a 3 his teammates keep feeding him until he misses a couple. Offensively he’s been opening this game up. This makes it easier for the other Stingers, his man can’t help off of him or it’s an open attempt from range.

On this play, Kamba passes it down to Johnson on the block. Then he goes to the top to set a screen for Peter-McNeilly as he comes down to the wing. Inexplicably, both defenders stay with Kamba, and Adika gets a wide open 3 and an assist for Johnson.

Since the Stingers essentially start 3 post players, the first two guys off the bench are guards. Jones has been exactly what this team has needed. He drains buckets when he has to but his passing has been awesome! For awhile he’s had more assists a game than points a game. When Jones subs in and sees 4 weapons around him in Stingers jerseys, he starts to salivate.

On this play, the Stingers force a turnover with some solid pressure. Moon sees that Jones is getting the steal, so he’s already sprinting the other way. Notice how Jones doesn’t pass it right at Moon, he passes it ahead of him towards the basket. This allows Moon to chase down the ball in stride without pausing his momentum. Then he politely throws down the one-handed dunk.

The rest of the rotation has been a bit by committee. When we need an energy guy, Kemel Archer has jumped in. Another Guard in the rotation, then it’s Kareem South (it seems like he’s been at a wedding and vacationing a bit the last few weeks.) Veteran big that can score, it’s Overwater. A scorer from the wing, it’s Adam Carson. A big that alters shots at the rim, it’s Sascha Kappos. All these guys have had an impact at some point during the season.

Our Stingers have 2 more road games remaining, both in Abbotsford against the Bandits. First today (Sunday, July 25th) at 2:00pm MT and then on Tuesday July 27th, 8:00pm MT. Here’s hoping we get to 10 wins before returning home!